October 30, 2017
I must have spent so much time out in the Broads lately that Otters now think I am part of the landscape! Let me explain how, for a brief moment today, I became an Otter whisperer.

I was out with my new toy (a parabolic microphone) when I bumped, yes literally, bumped into an Otter mum with her three cubs! Here are some of the recordings and a few photos.

At first not really knowing whether to keep recording sound or take photos, I ended up doing both, sort of. I edited out where I dropped the microphone to the floor! It was all happening fast and I was trying not to be over excited, so some of the photos are a little blurry (the camera was on the wrong setting initially), and the microphone was not in an ideal position! Was I going to miss the moment?

I heard the whistles/squeaks/screams ahead of me, and I wasn't really sure what it was at first, then right in the middle of the path I could see brown shapes wriggling in the long grass. I couldn't believe my luck when they all started heading along the path towards me.


I crouched to the side of the path taking photos, then when they got too close for my long lens I picked up the microphone. Mum level with me paused briefly and gave me a look before pressing on up the path with two cubs not far behind. The third cub had already caused her to pause a couple of times to allow it to catch up. When it got closer to me, and yelled very loudly into the microphone, she hissed a warning to the cubs and the two closest to her dived into the reeds between the path and the dyke. The little one (definitely a runt) took a liking to me and just kept yelling - Mum was in the reeds with the other two, all still communicating. I thought I should move on in the direction they had come from so Mum could pick up the runt. However, I soon found runty following me down the path, I stopped to take some photos of it, & the next thing I knew it was sitting on my left foot.


I noticed that one of its back legs was not working well, I quickly thought is there a chance it needs the vet, I could see no wound so I decided it would have a fighting chance if it stayed with Mum, and perhaps it was better in the water than on land. Now to get it back to Mum.

Back along the path we went. When it was level with where it's siblings had gone into the reeds it paused, there was some more whistles and warbles, I bit more hissing but eventually it crossed the path and went into find the family.

There was an explosion of excited whistles, which then softened as they all slipped into the water. Phew mission accomplished! Listen to the soundtrack and view all the photos of this Upton Fen adventure here:

Fingers crossed the leg function improves. If it doesn't make it, despite Mum's efforts, it's siblings looked in fine fettle.

Popular posts from this blog

Peewit, Lapwing, Green Plover, Vanellus vanellus, whatever you call them, they're in big population decline here in the UK. I'm a scientist, so here's a graph showing the data from BTO that proves it (y axis is a smoothed population index & green indicates 85% confidence limits).

Origins of the Lapwing name hail from Middle English lappewinke and lapwyngis, and back even earlier to the Old English hleapewince, all of which mean 'leap' and 'wince' or 'waver, move rapidly'. It's descriptive, as the Lapwing appear to make a big leap when they take to the air, and when on the ground they scuttle about quite rapidly. In that respect I'd hardly call them wavering, as I shall highlight below. However, when they're foraging they pause to listen, and patter on the mud using a foot, which increases their success rate in finding and catching invertebrates.


The distinctive calls of peewit, or kievit, if the Dutch birds (explains some of their oth…
Read more 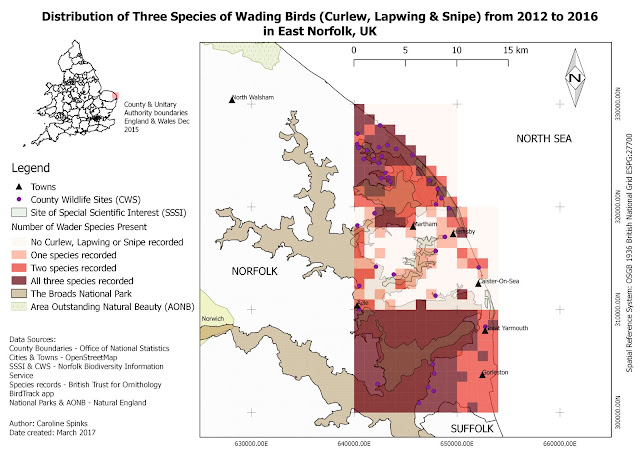 I recently completed an online course from the University of Oxford's Continuing Education Department, introducing me to the joys of GIS (Geographic Information Science/Systems) - I've always liked browsing maps, so to be able to create my own is just brilliant!

I thought I'd share my first map(s) - all about Curlew (CU), Lapwing (L) and Snipe (SN) in East Norfolk, which happens to be where I have been surveying farmland for evidence of breeding of these declining waders for the RSPB.

I gathered species presence data from BTO's BirdTrack records. BirdTrack is a citizen science project in which birders record lists of their sightings in 1km tetrads (fancy word for square) and upload them to the BirdTrack site, usually via the app, so that the clever bods at BTO can gain an insight into population trends and other details, such as the effect of climate change, important for their conservation. It's great at any time of the year to see what is going on in almost real t…
Read more